What is it?
Rice Bowl
What is it made of?
Plastic
Where is it from?
Japan
When was it made?
1991
Object ID
AB 93-5
Description

This red plastic rice bowl features a "Hello Kitty" design. The bowl is decorated with three color decals of Hello Kitty, or "Kitty-chan" as she is known in Japan, and one color brand logo with a teddy bear. The bottom is stamped with the manufacturer's information (Sanrio Company).

Hello Kitty, called Kitty-chan in Japan, is a fictional, cartoon cat character produced by the Japanese company Sanrio. She is a white bobtail cat who has a distinctive pink or red bow, and first appeared on a vinyl coin purse in Japan in 1974; she first appeared in the United States in 1976. Hello Kitty is emblematic of the kawaii ("cute") section of Japanese pop culture, and she is now an international phenomenon appearing on school supplies, fashion accessories, TV shows, high-end consumer products, and even at theme parks. 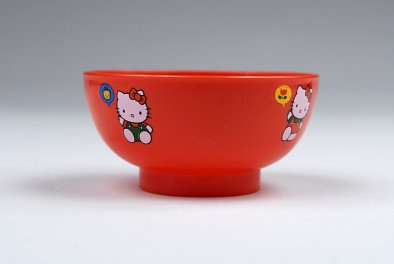