This ohashi setto (set of chopsticks) is for a child. The box has a sliding top; the chopsticks can be stored inside for transport to and from school. The chopsticks are made of wood, painted blue, and decorated with a boy and ghost and the logo "Obake no Q-Taro." The case is made of white plastic, with a clear plastic top. The top is decorated with a train going down the tracks, and with trees. The case and chopsticks were not intended to go together and were probably purchased separately.

Chopsticks are short, frequently tapered sticks used in pairs of equal length, which are used as the traditional eating utensils of China, Japan, Korea, and Vietnam. 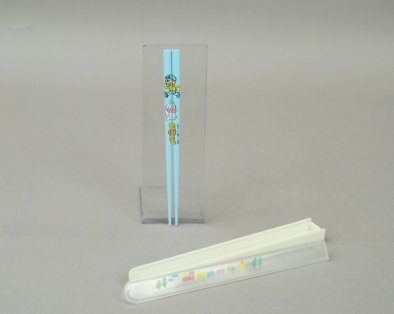