This tall, hexagonal ceramic pot is meant to hold soy sauce. The handle is made of coiled metal hooked onto the pot, and there is a bent stick inside the coil as boning. The underside of the lid has six kanji characters painted in blue ink. The exterior of the pot features a spring picnic scene of five figures (four male and one female) surrounded by flowers. The figures are dressed in Heian period (794-1185) court costumes, which indicate that two of the male figures are nobility while the other two are the attendants. (a) features the pot and (b) the lid.

Japanese pottery (tojiki, yakimono, or togei), one of the country's oldest art forms, dates back to the Neolithic period. Kilns have produced earthenware, pottery, stoneware, glazed pottery, glazed stoneware, porcelain, and blue-and-white ware. Many regions of the country developed their own styles, some of which may still be associated with these places today.

Credit
Donated by the estate of Miss Alice M. Pearse, 1953 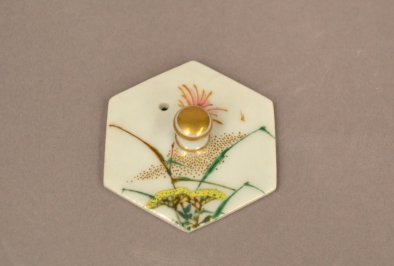